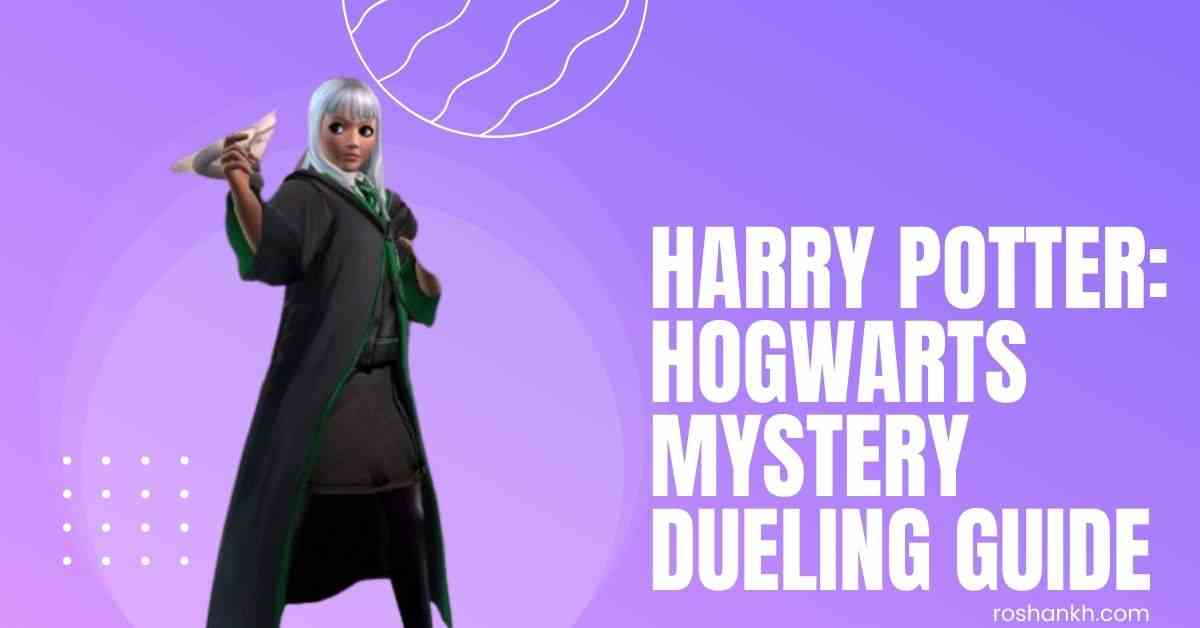 In the game Harry Potter: Hogwarts Mystery, duels are a mini-game in which your character fights another student or an AI-controlled avatar of another player’s character. They can only happen during particular campaign missions and Duelling Club events for now.

There are no penalties for losing duels in the campaign. However, during the Duelling Club, you’ll have a set number of entry tickets (lives) to take part in a lot of fights. You may either use your tickets slowly or purchase extra with Gems.

Duels are essentially a game of Rock-Paper-Scissors. You will start each round by selecting one of the three aggressive, sneaky, or defensive postures. 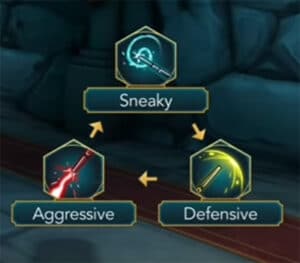 The end result of this system is that, when two combatants in a match choose to assume the same stance before engaging in battle, their styles are interpreted as follows. Sneaky beats Passive, Passive outperforms Sneaky, and Sneiky outmatches Defensie. The winner of the match will be determined by which style you chose.

A spell’s primary purpose is to inflict harm or heal, with the potential for either direct damage or long-term health restoration. A stun is also possible, as well as a chance to inflict damage or regenerate health over time. This may not be 100% accurate, but from our duels it appears that the damage over time effect occurs around 50 of the time.

Stuns occur less than half of the time. It’s more likely around 25%. A “small stun” lasts 1 turn, whereas a “medium stun” lasts 2 turns. 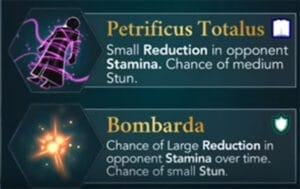 Petrificus Totalus has a “medium” or 2-turn stun probability, while Bombarda has a “small” or 1-turn stun possibility.

If a character is stunned, they will still be able to choose their stance each turn. If the player wins Initiative and has more activated abilities on their card than opponents does not mean an automatic win; instead it proceeds as normal with them trying out different spells until one connects!

If everyone takes the same posture, the round will tie and the character with less stamina will gain two points of stamina.

The game does not indicate that you may receive a damage bonus or penalty based on the gap between your character’s and the enemies’ attribute points. I did not get any more damage while attacking a character with 3 fewer attribute points.

Expelliarmus – 10 damage with a chance for a 1 turn stun

Incendio- 5 damage with a chance to deal 20 damage over 2 turns.

Confringo – 5 damage with a chance for a 2 turn stun

Wiggenweld Potion – 3 healing, with an additional 12 healing over 2 turns.

Bombarda – The player has a chance to deal an extra 10 points of damage over the next turn and a chance to also stun the opponent for 1 round after stunning him.

The new rules for the Third Duelling Club Event make it much more difficult to succeed; there is no method that assures you will finish the challenge. All we can do is select the stance with the best chance of winning and hope for RNG on our side.

According to statistics on Reddit, Sneaky has the best win rate of the three postures, but because it is so tiny, it isn’t completely precise. The ideal approach is to use an Immobulus and two Flipendos. Using a third Flipendo will result in 5 damage overkill, as your opponent has 40 health and Flipendo does 15 damage. Using an Immobulus early for 10 damage and a chance of stunning is the way to go.

It’s not necessary to use Diffindo all three turns since the computer will never be able to heal if you spam Sneaky Stance the whole game. Diffindo is technically the most powerful spell in the game, doing damage over 8 turns. It’s too slow for it to be effective, especially because the computer will almost always give you tie.

When you choose Sneaky, you’re betting on a Slowpoke. The computer will be using Incendio and Depulso, which are two very potent abilities. Incendio deals 5 initial damage with a 50% chance of dealing another 10 the next turn for a total of 25 damage. Depulso deals 17 damage. The computer appears to choose these abilities at random. After losing three turns, you should anticipate to die, but RNG can swing either way. I’ve died in two turns to an Incendio proc preceded by a Depulso while being attacked by three consecutive Incendios for a total of 15 damage.

Both healing and damage abilities are available in the Defensive Stance. Unless you want to heal, you’ll be selecting Bombarda every round for damage. Bombarda deals 10 initial damage with a 50% chance of additional 10 damage, as well as a 25 percent chance of minor stun (likely around 25%).

This implies you should be able to kill after winning three turns, but RNG might go either way. With procs, you can execute a two-turn kill, or a four-turn kill without any procs. The disadvantage of being Defensive is that you must consistently kills in three turns, rather than winning on your third won will result in loss.

If the AI is going to select Diffindo occasionally, this is the greatest plan. However, rather than being harassed by Flipendo, selecting Sneaky will slightly edge out Defensive.

For the previous two Duelling Club tournaments, I’ve taken down countless opponents utilizing Aggressive Depulso spam. I breezed through both of them and even played more games for energy despite losing only twice in total. That, however, has changed. It’s tough to say which spells are the best since the computer will occasionally take a defensive posture.

I’d use Incendio as my opening if there was no healing, followed by 2 Depulsos. Incendio is also good for people who like RNG because it has a chance to proc (25 + 17 damage).

The good thing about that is if Incendio doesn’t proc, you’ll be looking at a 4-turn minimum death. In the end, spamming Depulso will be the most secure approach to win because you’ll want the increased constant damage in case the computer decides to cast numerous heal spells.

The buff to Bombarda is the most significant reason why Aggressive spam is less powerful. In the previous two events, Bombarda did 5 initial damage with a 50% chance of another 10, so the AI never used it and simply healed and threw vials for 10 damage.

Now that Bombarda does 10 initial damage, it’s cast far more often. When you choose Aggressive, the computer appears to counter you harder. It might be chance alone, but it may also be overcompensation on the part of Jam City because aggressive Stance spam has been the meta approach for the previous two events.

Note: As of the third Dueling Club event, spamming Sneaky Stance is probably the greatest strategy analytically. It’s a safe three-turn kill with a small possibility of stunning yourself, ensuring victory if it procs.

So you’ve got the basics down, but how are you going to win nine duels with under three losses? There’s probably some method to choosing stances based on what the computer is currently favoring, however it appears rather haphazard. Both your character and the AI-controlled adversary begin with 40 life.

The simplest way to win is to be as aggressive as possible, no matter what. Then Depulso every time. Incendio does 5 less damage than Depulso, but it has a chance to activate the damage over time effect, which increases its potential for 10 more damage (up from 5). It isn’t worth it if it doesn’t proc the damage.

If you’re looking to just grab the most out of your fire teams, this is a devastating book. While it’s true that burning minions are easily removed by silence, they can be resurrected with healer support and will not die until there are no more copies left in play -> This book may be quite beneficial if utilized appropriately (it might potentially be worth)

Stuns also aren’t worth it; they have a low rate of occurrence and, in addition, you must pick the proper stance to do damage the next turn.

The reason you go aggressive every time is that only defensive can beat you, leaving your opponent unable to use their most harmful spells. At worst, a throw vial causes you to take 10 damage. The AI will frequently cast Bombarda since it was buffed to deal 10 initial damage, giving you a chance to suffer 20 damage in one turn.

I’ve employed this method for at least 20 duels and have only lost twice. One time, the AI just arbitrarily chose defensive five times in a row… I’ve only seen it use the same stance three times in a row out of all the other fights I’ve done.

The third and worst loss came when I got flustered after the AI went for defensive three times in a row, and I tried to use Sneaky… Of course, he picked aggressive and Depulso’d me for 20 damage. If you’re going to implement this approach, avoid stopping selecting aggressive at all costs.

The majority of the time, you should focus on generating income by developing more and more basic games. This strategy will most likely not work indefinitely since Jam City appears to have altered the AI somewhat between the first two Duelling Club events. After the third event, we’ll see if anything has changed.