Netflix’s newest manga to anime adaptation, High-Rise Invasion, has received a lot of good feedback from the anime community. The show is comparable to Future Diary, in which a group of individuals competes for the prize of becoming a God at great risk. Read on to learn about all of High-Rise Invasion’ s major characters.

In this Japanese anime, a high school student named Yuri Honjo is transported to a world full of skyscrapers and suspension bridges connecting them. She becomes the prey of masked individuals.When she reaches the high rise, she’s greeted by a group of kids who tell her they’ve been searching for her. She encounters other teenagers in similar circumstances later on, but it’s unclear if those people are friends or foes. Anime enthusiasts are ecstatic about learning the identities of the characters in High Rise Invasion and are anticipating to learn their names.

Who Are The Characters In High Rise Invasion Anime?

Who is your favorite anime character? Do you know who the characters of High Rise Invasion are? All anime characters are young females and males who reside in a mystical town and are surrounded by odd and masked individuals. Yuri Honjo is a high school student who has been sent to a strange world with high-rise structures for no apparent reason. She and others like her are pursued by white-masked killers.

She, as well as Tsubaki and Masami, is transported to the intriguing metropolis. Everyone, including her parents, tormented and neglected her, and she became a cold-blooded killer in this new world. She is hesitant to trust people, but after being saved by Yuri, she agrees to assist him.

Kano is a wonderful individual. She’s also known as the Railgun User. She’s fragile and young. She’s accustomed to high social mores, so she has no idea what lurks in the shadows at first glance.

Yuri Honjo is the older brother of Rika, who has also been transported to the strange skyscraper world. He becomes the leader of a small human tribe in this strange place, working hard to discover a means out of it.

Sniper Mask is also known as “Mr. Sniper”. He is an Angel who wields a sniper rifle and has an unknown connection to Rika.

Mamoru Aikawa is a God Candidate who commands the loyalty of thirty Angels.

Aikawa’s Angel is Yayoi Kusakabe, who acts as an adviser.

Kazuma Aohara, also known as the Angelic Challenger, controls Angels Ein and Zwei. He was initially obsessed with being a Perfect God, but after being defeated by Yuri, he joins her team. 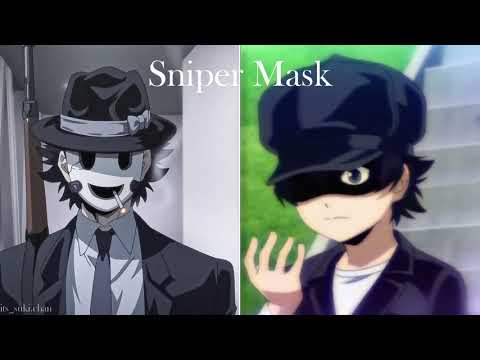 The voice cast of the characters is given below:

1. Who are the characters in High Rise Invasion?

2. Who is the cast of High-Rise Invasion characters?

3. Who is the voice actor of Mayuko Nise?

Shiki Aoki is her voice actress.

4. Who is the voice actor of Kuon Shinzaki?

Akira Sekine is the voice actor for this character.

5. Who is the voice actor of Yuri Honjo?

The voice actress is Haruka Shiraishi.

6. Who is the voice actor of Rika Honjo?

Junya Enoki is the voice actor.

7. Who is the voice actor of Sniper Mask?

Yuichiro Umehara is the voice actor.