History of magic classroom gets unlocked in year 5 of Harry Potter: Hogwarts Mystery.In this class it is taught by ghost of professor binns and he is one of the boring class teacher.here in this game you need to complete answering history of magic for example 8 hour of class will feature 4 question and 1 sense hexes mini game. 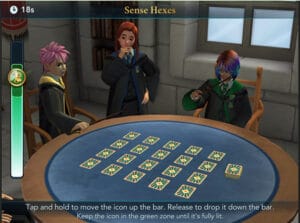 You need to tap of hold finger on screen which will raise the scroll at the speed which depends on how rapidly the screen is tapped so you need to tap at the right rate to get to the green marked are and keep for 5 seconds you will win here you can checkout all the questions which can be asked in history of magic class :

A: Hengist of Woodcroft

Q: Emeric the Evil was killed in a dual against whom?

A: Egbert the Egregious

Q: When was the Golden Snidget first introduced into the game of Quidditch?

Q: Why did the Warewolf Code of Conduct fail?

A: No Warewolves Signed it

Q: Which of the following was a reason why the 14th century witch burnings were pointless?

Q: Which wizard used the Tarantallegra spell to in 79 AD to conjure a dance within Mt. Vesuvius

Q: When did the wildcat gargoyle strike take place?
A: 1911

Q: My History of Magic class is focused on what?
A: Facts

Q: What is my signature item?
A: Diadem

Q: Who was the original owner of the sorting hat?
A: Godric Gryffindor

Q: What trait did Godric Gryffindor value most in a student?
A: Courage

Q: When did my fellow Founders and I found Hogwarts?
A: 10th Century

Q: What trait do I value most in a student?
A: Intellect

Q: What is Godric Gryffindor’s signature item?
A: Sword

Q: Who was the first Quidditch referee to die in Quidditch match?
A: Cyprian Youdle

Q: Where did the Goblin Rebellion of 1612 take place?
A: Hogsmeade Village

Q: Who was the first Minister for magic?
A: Ulick Gamp

Q: When did Gringotts Wizarding Bank open?
A: 1474

Q: Where did Professor Binns die?
A: In Front of the Staff-Room Fire

Q: Which Minister of Magic resigned following the goblin rebellioin of 1752?
A: Albert Boot

Q: Which ghost haunts the second-floor girls’ bathroom in Hogwarts ?
A: Moaning Myrtle

Q: Which is NOT a reason for a wizard to ramain on earth as ghost?
A: Hunger

Q: I am the patron ghost of which House?
A: Gryffindor

Q: What am I most known for?
A: My Partially Severed Neck

Q: Who is Ravenclaw’s patron ghost?
A: The Grey Lady

Q: Who is Slytherin’s patron ghost?
A: Bloody Baron

Q: What is my full name?
A: Nicholas de Mimsy-Porpington

Question by Peeves the Poltergeist

Q: Who is the History of Magic professor?
A: Professor Binns

Q: Who is the Herbology professor?
A: Professor Sprout

Q: Which of these best describes Slytherin House?
A: Resourceful

Q: Peevesy thinks food is meant to be … ?
A: Thrown