Pink hair is a common sight in the anime world, which might seem strange if you saw it in person. Pink isn’t the most popular hair color among Anime characters, although it is worn by a number of well-known personalities, including Sakura from Naruto, Natsu from Fairy Tale, and Yachiru from Bleach. Even if pink hair implies purity, there are others like Lucy from Elfen Lied that you don’t want to take lightly. Although the vast majority of the characters on this list are female, there are a few male characters with pink hair in anime.

I don’t know if you’ve noticed, but pink hair is extremely fashionable in anime. I mean, why not? Soft pink hair is something that I enjoy as well. Personally, I’d want to dye my hair pink! Chika Fujiwara, the #1 girl on this list, and the most well-known pink-haired lady, has toppled Zero 002!Chika is a third-year high school student at Shuchi’in Academy, where she is a member of the Tabletop Gaming Club and serves as secretary of the high school Student Council.

She is a happy and odd young woman with an infatuation for love. Chika has become a self-declared love detective as a result of this interest. Chika is the sort of individual who, despite having fresh fun concepts/activities, always ends up amusing others and herself. Also, take note of Chika’s dancing. So adorably cute! When you first meet Zero Two, she appears to be a normal girl. When you look at her, you wouldn’t think she isn’t human (or is it just me?). She has horns and is a human-klaxo sapien hybrid girl, after all. To quickly expand on that point, Klaxosaurs are the series’ main antagonists, so Zero Two is seen as a monster because of her stature.In the first part, she is cold and emotionless, placing her duty as a Parasite above all else because she wants to be recognized as a person; this changes when she meets a boy named Hiro, who will soon become her partner/pilot. This is when she begins to transform and display her lighthearted, carefree, and passionate side. The most well-known Yandere (ever), who kickstarted the craze, has arrived! Yuno may be described as kind as sugar in personality, as well as appearance. She can, however, snap at times, revealing her darker side: cruel, violent, and cold Yuno.

When she thinks it’s for her or her lover’s benefit, she becomes like this. Yuno has no trouble eliminating individuals who she feels are a hazard to the world. She is also a stalker, as shown in the flashbacks. Mitsuri is a Demon Slayer of the Demon Slayer Corps and Love Hashira’s current love. She is a Hashira, which implies she is one of the most elite fighters, and “Love” symbolizes her unique way of breathing known as the Love Breathing technique.

This innovative approach was created by no one else than Mitsuri, who modified the Flame Breathing approach to fit her own needs.Mitsuri is a cheerful, sweet lady who can get flustered quickly. She also has a habit of continuously telling people how wonderful they are in her mind, thus the name Hashira of Love seems perfect for her. Kaede is a young girl who was born in Japan and has horns. She’s the first of the diclonii, a human sub-species that appeared in the late 1990s. Diclonius have horns and the ability to murder by means of vectors, which are high-vibrating invisible arms.

A really distressing fact is that Lucy was never loved and was subjected to a plethora of abuse, which resulted in her displaying sadistic behavior towards others and committing unforgivable sins and injuring people she cares about and who care about her.She moves between Lucy and Nyu “mode” after her personality split as a result of the brain damage.

Nyu is a very stupid personality, where she acts like a kid and has no recollection of her past actions or life. On the other side, Lucy’s personality lacks compassion for people but shows concern for the young man whom she formerly cared about and ended up injuring.

Read this too: Strongest Anime Characters

Inori is a member of the resistance guerrilla organization known as Funeral Parlor. She also performs lead vocals for Egoist, a band in which she is a member.

The most important quality of her is loyalty to people she values, which is demonstrated numerous times throughout the series, making her an excellent waifu. #7 on our list is Madoka Kaname. She’s a kind and honest person who is completely committed to the idea that her sole reason for existence is to serve others (a real altruist, this one).

Madoka also appears to have low self-esteem. After becoming a Magical Girl, she appears to retain her original personality characteristics while displaying increased self-assurance. Her primary goal was to save a dying cat, which only demonstrates her innocence and generosity.

“If someone tells me that it’s wrong to hope, I’ll tell them that they’re wrong every time.” ~ Madoka. Nino is the second of the Nakano Quintuplets, who takes on the role of family mother by cooking meals and caring for their medical needs.

She’s a kind lady with a big heart. Nino is also an outgoing and sociable person, acquiring new friends without much effort. She has a tsundere personality, but she is often arrogant, rude, and short-tempered with certain individuals (such as her hostile attitude towards Fuutarou Uesugi at first). Kotori is a middle school student who leads a secret organization called Ratatoskr that works with supernatural beings known as Spirits through nonviolent means.She is the little foster sister of the main hero and adores him. Her personality appears to alter as her ribbons’ color changes. When she wears white ribbons or none, she is the “weak self,” a delicate tiny cute sister.

If she dons black ribbons, she becomes the “strong self” who is confident and charismatic, and in control of the airship. Another personality emerges if she remains in spirit form for too long – the “Spirit personality.” This personality can be described as sadistic and acts like a killing machine. Sakura is both adored and hated by Naruto fans. She’s primarily hated since she has a love obsession with Sasuke Uchiha, which appears to be her only goal in the series for the first hundreds of episodes.When we look at her personality,

she is usually composed and confident, but she demonstrates signs of impoliteness towards Naruto and rivalry with her old friend Ino. Sakura isn’t the most attractive character in Naruto, but she’s intended to be somewhat cute. Although many people believe that Sakura is stupid, she consistently performed well in exams while attending the Academy and demonstrated analytical abilities during fights. 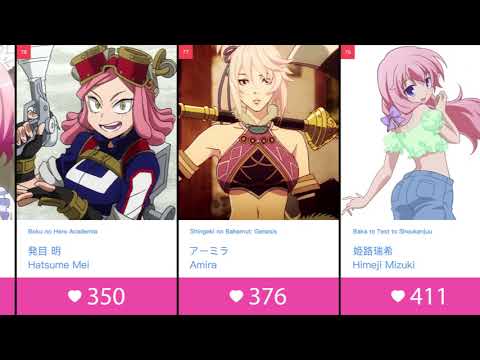 1. Who has pink hair in Naruto?

2.Which anime girl has pink hair and blue eyes?

Utena Tenjou is an anime character with pink hair and blue eyes.

The #1 anime in the world is Fullmetal Alchemist: Brotherhood (TV).

4. What is the most liked anime?

5. What colour is Mine’s hair From Akame ga Kill?

Akame’s hair is pink in color.